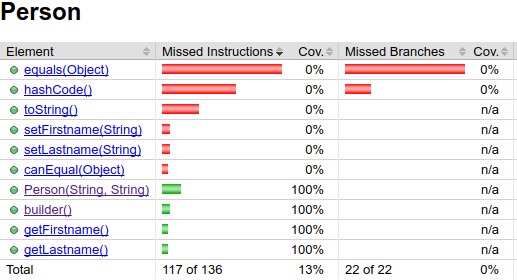 Update 15. January 2018: Jacoco 0.8.0 has been released. No need to build it from the SNAPSHOT version anymore.

Test Coverage is a code metric that indicates how many lines of code, as a percent of the total, your tests execute. It can’t tell you anything about the quality of your tests, but it nevertheless is one of the most important metrics in use. Jacoco is one of the most prominent test coverage tools for Java.

Lombok is a Java library that generates common boilerplate code like getter/setter methods, hashCode, and builder classes during the compilation phase. This improves development speed significantly.

Lombok causes problems when your project requires a minimum test coverage rate that is also checked by a CI System such as Jenkins or Travis. Jacoco can’t distinguish between Lombok’s generated code and the normal source code. As a result, the reported coverage rate drops unrealistically low. You the developer are left with two options:

Neither option makes sense and neither is desirable.

Luckily, beginning with version 0.8.0, Jacoco can detect, identify, and ignore Lombok-generated code. The only thing you as the developer have to do is to create a file named lombok.config in your directory’s root and set the following flag:

This adds the annotation [email protected] to the relevant methods, classes and fields. Jacoco is aware of this annotation and will ignore that annotated code.

Let’s suppose we have a Person class that contains fields for first- and lastname. We are using @Data which will generate the getter/setters, hashCode, toString and equals methods. We also use @Builder which generates - as the name says - a builder pattern for instantiating an object.

Then we have a PersonPrinter class that contains logic for printing a Person. We annotate it with @Log to instantiate a static logger and again @Data:

The only logic which should be tested is PersonPrinter. The following two test cases should actually give us 100% test coverage:

Unfortunately, this is not the case since Jacoco also counts the generated code from Lombok:

By adding the flag lombok.addLombokGeneratedAnnotation = true before cleaning and running the tests again, we see that Jacoco has completely ignored the class Person and shows us 100% test coverage:

As always the source code is available on GitHub.  It contains support for both Maven and Gradle.